The following provides a partial list of products manufactured under the Canon brand.

Other products manufactured and/or service-rendered under the Canon brand may not appear here. Such products may include office or industrial application devices, wireless LAN products, and semiconductor and precision products.

Seiki Kogaku (now Canon) began to develop and subsequently to produce rangefinder cameras with the Kwanon prototype in 1933, based on the Leica II 35mm camera, with separate rangefinder and view finder systems (3 windows). Production began with the Hansa Canon on the Leica III format through WWII. Post war Canon resumed production of pre-war designs in early 1946 with the JII viewfinder and the S1 rangefinder. But in late 1946 they introduced the SII which departed from the Leica design by offering a combined viewfinder/rangefinder system, reducing the windows on the front of the camera to two. However, in most other respects these cameras remained visually similar to the Leica III.

In 1956, Canon departed from the Leica II Style and developed a more contemporary look, along with a Contax style self-timer level to the left of the lens mount. This was the first Canon camera with a swing-open camera back for film loading. Upper end models had a new three-mode viewfinders and winding triggers.

Canon partnered with US manufacturer Bell & Howell between 1961–1976 and a few Canon products were sold in the US under the Bell & Howell brand e.g. Canon 7 Rangefinder, Canon EX-EE, and the Canon TX.

In 1969 Canon introduced an economy camera/lens system where the rear three elements (in two groups) were built-on-to the camera, and several front element options could be interchanged. This had been used by Zeiss-Ikon in their mid-level cameras of their Contaflex series, and by Kodak in early interchangeable lenses for the top-end Retina series (later going to full lenses). Canon offered four lens options: 35mm f/3.5, 50mm f/1.8, 95mm f/3.5, and 1255mm f/3.5.

Through the lens metering was center weighted and automatic exposure was shutter speed priority. Only two cameras were offered and the line was not successful. 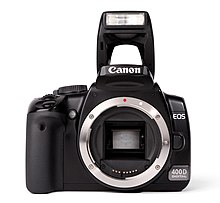 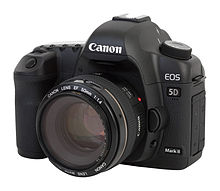 A Canon Powershot A200

A Canon Powershot A40.

Canon Powershot A540, photographed using itself and a mirror.

The 300T is a layover from the FD system, it was introduced with the FD mount Canon T90, but is compatible in TTL mode with most non-digital EF cameras.

EF-S lenses are built for APS-C 1.6x crop sensors, so it will only work with models that use this sensor size, such as: Canon EOS Digital Rebel series (300D through 750D and 760D, 100D, and 1000D through 1200D), and newer cameras in the prosumer Canon EOS Digital series (20D through 80D, 20Da, 60Da, 7D, and 7D MkII). When EF-S lenses are used on a 35mm (full frame) camera, the back element will hit the mirror assembly or cause massive amounts of vignetting since the sensor is bigger than the image produced by the lens.

Note: Even though the tilt-shift and dedicated macro lenses are designated TS-E and MP-E respectively, these lenses are still compatible with the EF mount.