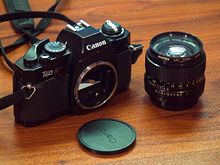 The Canon T60 was the last manual focus FD-mount 35 mm single-lens reflex (SLR) camera sold by Canon; it was introduced in 1990, three years after the introduction of Canon’s incompatible EOS system of autofocus SLRs and their EF lenses. It was the final camera in Canon’s T series.

It was introduced solely as a cheap SLR system for export. It was never sold in Canon’s home Japanese market. In some foreign markets, the higher price of the EOS cameras was a problem, while in others, there was demand for a cheap, largely manual camera for photography students and the like.

The T60 shared little with the other T-series models except for a superficial styling resemblance. Unlike them, it had only manual film loading, advance and rewind. Film speed and shutter speed were set with traditional dials.

The only auto-exposure mode supported was aperture priority AE. The camera would choose an appropriate shutter speed. Also supported, of course, was full manual exposure, aided by the camera’s built-in meter. Shutter speed range was 1/1000 to 1 second, plus bulb.